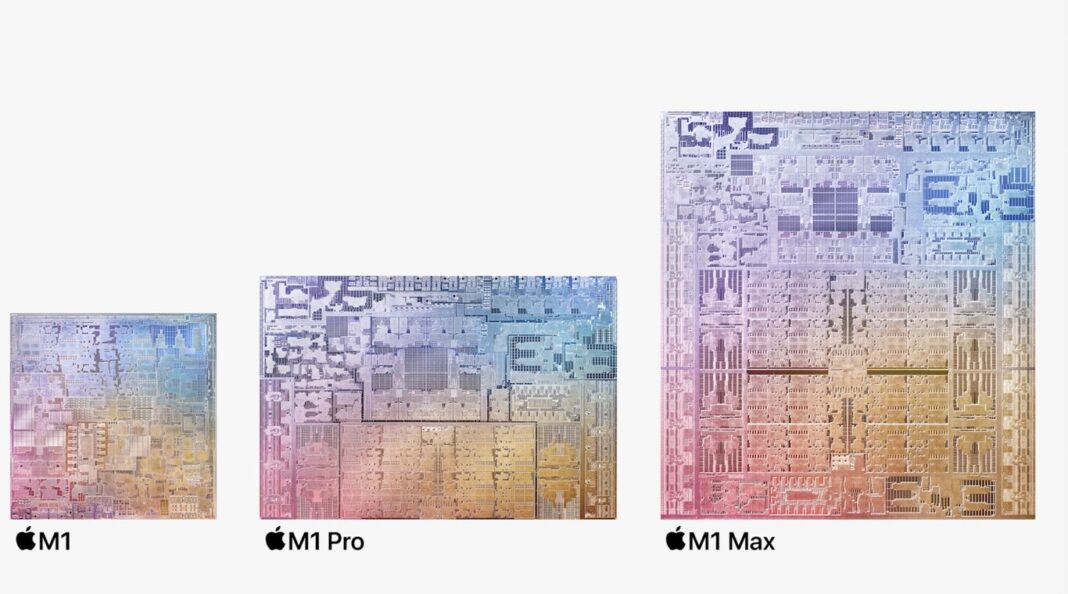 As expected, these new chips are real beasts in every way, and Apple has once again boasted about them, comparing them with graphs that do not show exactly which products they are used against, but emphasizing that everything is done with much less consumption than its competitors, both in GPUs (compact and high consumption in laptops) and in CPUs.

The M1 Pro seemed to be the big surprise of the keynote, but it was only the first product. It has 10 CPU cores and 16 GPU cores. The former is “double” the M1 if we count that there are now 8 high-performance cores and two high-efficiency cores. It is in graphics that the double comes without asterisks, giving much more capacity in games and in applications that need compute power in computing with Metal.

The GPU is composed of 2,048 execution units, with a power of 5.2 teraflops, offering 164 gigatexels per second and 82 gigapixels per second. The Neural Engine again has 16 cores, promising 11 TOPS.

READ:  The Apple M2: the new generation of Apple chips is more powerful and efficient than ever

It now supports up to 32 GB of RAM (up from 16 in the M1) and has support for two external displays, and an encoder and decoder for the Apple ProRes format. We’ll have to see what the public is capable of with those 200 GB/s, which is three times the M1’s figure. With GPU performance similar to that of dedicated PC graphics, Apple boasts that with the M1 Pro it achieves this using 70% less power.

In tests shown by Apple, the M1 Pro achieves up to 3 times the Logic Pro performance of the 13″ MacBook Pro with Intel Core i7 quad-core. In GPU, with respect to the Intel Iris Plus of that model, the M1 Pro achieves, with 16 CPU cores, 9.2 times the performance rendering 4K in Final Cut Pro, and in 1.7 times more than the 8 GB HBM2 Radeon 5600 that until now was in the 16″ MacBook Pro. In Maxon Cinema 4D, 3.6 times the 3D performance of the Iris Plus and 2.5 times faster than the aforementioned Radeon 5600.

If the M1 Pro looked amazing, the M1 Max is what you would expect to see in “real” professional notebooks. Finally comes support for up to 64 GB of RAM, support for four external displays, 400 GB/s of bandwidth, and unlike the M1 Pro, 32 GPU cores, which Apple has directly compared to high-powered dedicated graphics on large notebooks. The GPU is composed of 4,096 execution units, clocked at 10.4 teraflops, delivering 327 gigatexels per second and 164 gigapixels per second.

READ:  Intel Core i5 8265U: Learn all about the Intel Processor

The 10 CPU cores arrive, like those of the M1 Pro, in the same 8+2 configuration, with 8 high-performance cores and 2 high-efficiency cores. The manufacturing process, like that of the M1, is again 5 nanometers. In CPU performance, Apple promises more than twice the performance of the 8-core i9 in the 16″ MacBook Pro until today, while with NASA TetrUSS fluid dynamics it is up to 3 times faster than that i9.

Another of Apple’s promises with the M1 Max is that it will not drop performance when MacBook Pros equipped with it run on battery, as opposed to what it says happens in PC laptops. It’s due, again, to the efficiency it boasts. Apple claims that the M1 Max will be able to outperform compact professional PC notebooks in graphics, using 40% less power. According to its graphics, 100 watts less than a comparable (even slower) GPU with 160 watts of power consumption.

With that power consumption, Apple boasts 4 times faster rendering with Redshift than the Radeon 5600M with 8 GB of HBM2 memory that was in the 16″ MacBook Pro sold until today. In Photoshop, for example, GPU-accelerated functions are 2.1 times faster than that AMD.